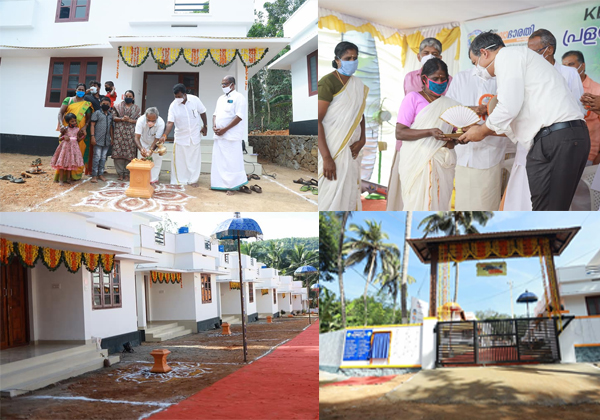 The reconstruction of Punarjjanigramam at Kottambathoor has a long story of fight and rebirth. Sevabharathi addressed the whole situation as the reconstruction of the same Kottambathoor colony to a new place. For that we have brought the land for the whole seventeen houses and give it to the beneficiaries. Later constructed the houses for the family and handed over the key to the people. The incident of landslide happens in the August 2018 and we took whole two years to fulfil the dream of house of those each household.

It is on that day the dreams of those people were washed away on the heavy rain and land slide at Kottambathoor in Pallam village of DesamangalamGramapanchayath.  One minor and a major land slide resulted in washing away almost two acres of land and seven houses completely and another ten partially. It also makes the whole area not fit to live and hence the people of the whole colony force to move from the place. There were newly built houses, there were houses waiting for the house warming and there were houses which construction is going on. The major land slide also snatched four precious lives of Sajeev, Harinarayanan, Ranjith and Shivadasan. They lost their life when they come back to colony after the minor slide to collect important documents and at that time the major one happens. The whole area was declared as to be abandoned by the geology department. And hence the people are forced to abandon the houses which are even waiting for the house warming.

There were 33 families in the colony. Sevabharathi has the plan of action as rescue, relief and rehabilitation. The volunteers from nearby places rushed there for the rescue mission. It took almost 200 manly hours of work for the rescue mission. Hence there is no house for them to go back, the life of these people are in dilemma. One of the longest serving relief camps of the district is in Kottambathore just because of this disaster. Still there are relief camps operating at nearby government institutes. When Sevabharathi steps in to the next level of our plan to rehabilitate, only seventeen families were ready to give application for houses. Due to local political and apolitical pressures, sixteen families opt to go for the government aided houses which are yet to finish its second last stage of construction which resulted in the continuation of relief camps of the panchayath.

For the seventeen people who submitted formal application for the houses, Sevabharathi brought land for them. On 22nd December 2018, the land were distributed to the beneficiaries by Retd DGP of Kerala Police Shri T P Senkumar IPS. Rashtreeya Swayamsevak Sangh, Pranth Sanghachalak Mananeeya Shri P.E.B Menon attended the function. The function was attended by hundreds from near and there. Later in the month of April, the works were started officially. The work has progressed faster. The world stood by us for the completion of the work even though several barriers come in front of us.

For the last two years, from the day we start the construction, several dignitaries from Sangh circle as well as from outside visit the place for the moral as well as ideological support. RashtreeyaPranthaSanghachalak ji visited the place at the time of document distribution and help us to create a blue print of how the colony should be it completes. The work progressed in good phase after that. The initial foundation sketch was done by Swami SankaraViswanathananda and the foundation stone was laid by MananeeyaVibhagSanghachalak Shri K S Padmanabhan Ji.

The function was started with the prayer by Kumari Darshana followed by the welcome note by Shri D Vijayan Deseeya Sevabharathi Keralam General Secretary. In the welcome note he points the seva activities Sevabharathi done during the time of distress. He remembered the Eknath Ranade Ji’s remarks at Vivekananda Kendra. The dignitaries were welcomed with momentum at the function. Post the welcome note Dr V Narayanan had the presidential address. In the address he explained different projects of Sevabharathi along with the struggles and barriers we faced to fulfil others dreams. The people understands that Sevabharathi is not just people who coms for relief activities but Seva activities much more than that, projects like Vidhyadarshan, Punarjjani Counselling centers etc. were examples for the same, he added. Because of the quality and intensity of our service, even people who criticise us are now trying their best to applause activities of Sevabharathi. During the address he didn’t forget to give a best wish to the inhibitors of the houses a good and prosperous life and concluded the address.

After the presidential address Man.C.R.Mukund ji inaugurated the function through online platform. In his inaugural address he pointed it is the organization which makes the society stronger. To face strong challenges and face problems, society must be strong enough and that is what DrJi foresee through the formation of Sangh. The human body organization will be ideal for the organizational strength. The right hand will never hesitate to wipe the problem faced for the left hand of the body. Like that everyone will remember that they are a part of large social body and try to wipe the sorrow of others, and the activity must be natural process, he added. He also congratulates the Sevabharathi for finishing the project even I the midst of Corona Pandemic. The way Sevabharathi faces the threat of serving the common people during the Corona days and the great challenge of people returning to their homes in those days, he remembered. He also congratulated Sevabharathi for its services and national recognition for the services. After the inaugural speech, Man,Shri S Sethumathavan felicitates the people who worked behind the success of the project. Shri M.K.Ashokan Thrissur VibhagSahakaryavah and project incharge, Contarctor P V Shaji and K P Praveen were felicitated.  Followed by the felicitation, starts the key distribution ceremony. The Keys were handed over by fifteen dignitaries to the beneficiaries.

After the Key distrubutionVibhagSanghachalak Man. K S Padmanabhan, JillaSaha-Karyavah Shri K N Gopinathanand Khand SanghachalakMan.T.P.Rajan felicitated the workers who worked at the site as a part of the construction team. Concrete workers, masons, floor tile workers painters etc. were felicitated. The workers were given a momentum and cloth. The felicitation was followed by the special address by Man.S.Sethumadhavan. In the address he noted different sides of service activities and the Sevabharathi way of services. With stories and slokas he shared the importance of service and delivery of services. He also remembered the fallen souls in the service of the society during the land slide of August 2018 and initiate the importance of service and to be served.  Vibhag Saha-Karyavah Shri M K Ashokan delieverd the vote of thanks for the session and with the Shanthi Manthra the function has ended.

Post the function a group photo of the beneficiaries along with the special guests has taken at the stage. Man.S.Sethumathavan, Shri Kunjol Master, Shri P Gopalankutti master and Dr.V.Narayanan posed for the photo with the beneficiaries. The beneficiaries along with their family members come on the dies for the photo. After the photo, Tulasi plants after special poojas in seventeen nearby temples were to be planted infront of the new houses by seventeen dignitaries. The Family members of the respective houses took the dignitaries to their houses for planting tulasi. The function concluded by lunch at around 2PM.