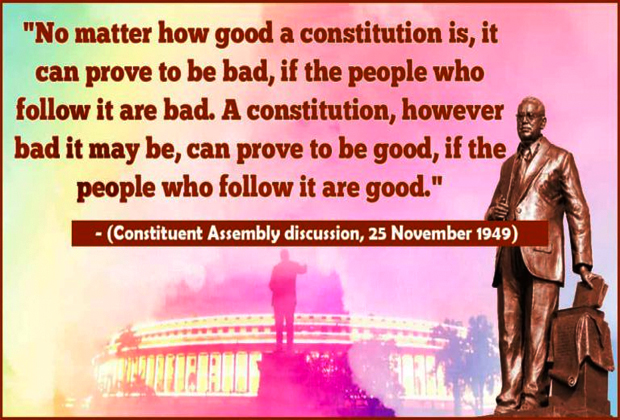 This year marks the birth centenary of Dattopant Thengadi – one of the tallest RSS ideologues and the founder of more than a dozen RSS-backed organisations, including the Bharatiya Mazdoor Sangh (BMS) and the Swadeshi Jagran Manch (SJM).

The BMS is the largest labour organisation in the country, while the SJM is an outfit that has played a significant role in shaping India’s discourse on economic policy for more than two decades.

Thengadi, despite being one of the most dynamic RSS leaders, kept a low profile and, hence, very few would know that he was not just a crucial link between Dr Bhimrao Ambedkar and the RSS from 1940s onward, but that Ambedkar even wanted him to contest the by-election for Bhandara seat in Maharashtra.

Thengadi has given a detailed account of the meetings between the RSS leaders and Ambedkar in his book Dr Ambedkar aur Samajik Kranti ki Yatra.

The book is based on Thengadi’s personal experiences and interactions with Ambedkar.

As a young RSS pracharak, Thengadi was such a blue-eyed boy of Ambedkar that he was appointed as the secretary of the Scheduled Caste Federation when Ambedkar was its chairman.

He was also the election agent of Ambedkar during the by-election for Bhandara constituency.

“The RSS workers worked day and night for Babasaheb (Ambedkar) on the directions of Guruji (the second RSS Sarsanghchalak M.S. Golwalkar)… Though Babasaheb lost this election but when he analysed the poll results he realised that the votes which he polled were much more than the total number of Scheduled Castes’ votes there. A large number of upper class voters had also voted for him. He was quite content with this outcome,” wrote Thengadi in the book.

It was after this defeat – a couple of days after he adopted Buddhism – that Ambedkar told the Scheduled Caste Federation leaders at a meeting in Nagpur, Maharashtra, that the polarisation between the upper and the backward castes doesn’t exist in the wake of what happened in Bhandara by-election.

So, Ambedkar felt, it was time to replace the Federation as its name was caste-specific. He mooted the idea of replacing it by setting up ‘Republican Party’, a new outfit with a generic name.

Ambedkar’s first formal interaction with the RSS, as recorded in the RSS’ archives, took place in 1935. He had visited the first RSS training camp for Maharashtra in Pune. He had gone to Dapoli near Pune for some work where he visited an RSS shakha.

In 1939, he was invited formally to an RSS training camp in Pune, where he met RSS founder Dr K.B. Hedgewar.

There were more than 500 RSS volunteers at the camp in uniform. Ambedkar was quite impressed by the fact that there was no discrimination on the basis of caste. The incident has not only been recorded in the RSS’ archives.

In September 1949, the second sarsanghchalak (chief) of RSS M.S. Golwalkar went to Delhi to meet Ambedkar to express his gratitude for the help he offered in lifting the ban on the RSS. The ban was imposed by the then Congress government after the assassination of Mahatma Gandhi on 30 January 1948 in Delhi.

In June 1953, senior RSS functionaries Moropant Pingley and Balasaheb Sathey met Ambedkar in Aurangabad, Maharashtra, where the latter asked for detailed information about the outreach of the RSS.

Ambedkar told the RSS functionaries that if they really wanted to unite the Hindu society, they should expedite the expansion of the organisation. He told them that backwards couldn’t wait for too long, so the RSS should hurry up.

Ambedkar also told Thengadi later, “Unless the backwards get a direction and redemption, they would be so full of anger because of their state that they would become cannon fodder for communism.”

Recounting this conversation, Thengadi wrote in his book about what Ambedkar told him, “Between Scheduled Castes and Communism, Ambedkar is the barrier.”