Sangh For Global Well Being and Peace…..

by Narender Sehgal
in Articles 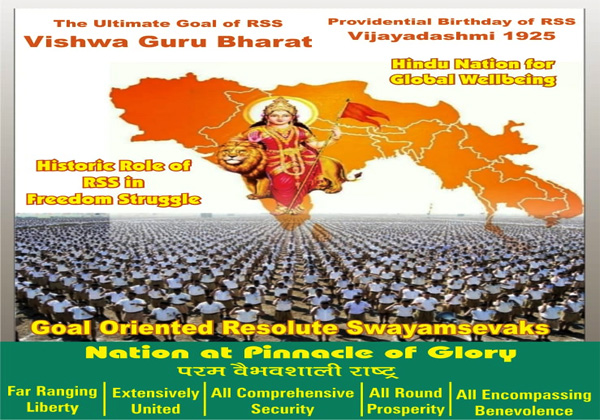 Global aim of Bharatvarsh is welfare of the whole world.  Only a strong and powerful India in its prime glory is guarantee of global welfare . It is only the sprituality based eternal culture (Snatan Sanskriti) which not only offers a strong base for Indians but also for all sections , religions and different ideologies of the world. Basically Hindu Rashter is expression of harmonising quality of our culture and our social setup.

The vision of a re organised resurgent and resplendent Bharat shedding peace and light on the whole world and commanding the homage of the whole of humanity will become a living reality.

The concept of resurgent and resplendent Bharat  is not that of a political or geographical unit. Centuries old cultural identity spread over an unbroken geographical area finds expression in Hindutava or in Hindu. The fact that Hindutava is not some religious practice but a way of living , has even been accepted by Supreme court of India. All different faiths which originated and flourished in India are different definitions of same way of living.

To understand ideological base and working of RSS , one has to understand cultural concept of a nation .

Every Indian whether offering prayers in temple , Gurudwara, church or mosque, is a Hindu , if he treats this land as his motherland, ancestral land and sacred land. Any Indian who has no hesitation in saying Bharat Mata Ki Jai (praying for the glory of Bharat Mata,) is a Hindu. In other words Hindutava translates into nationalism . Being Hindu itself means being Indian. It is rightly said that nationality of a person is irrespective of his religious practice or his class or a section to which he belongs.

Global vision of Hindutava has to be understood in proper perspective in the context of our world . Hindutava concept of human life is universal , encompassing all human aspects , assimilating and continuously evolving . This concept is not only for Hindu society but can also form  basis of universal brotherhood and peace in the world. Hindutava believes in ‘ sarve bawantu sukhina’ (prayers for happiness of everyone), ‘atamvat sarvbuteshu’ (everyone has same soul). This time immemorial culture treats whole world as a family. (vasudhev kutumbkam).

Ideology of consumerism based on materialistic life style cannot lead to a sustainable holistic human development. Ideology of dividing humanity between them and us, limiting global welfare to over feeding of sumptuous meals and life of luxury for a few is leading humanity to a great disaster. Over exploitation of natural resources by few for their luxurious life at the cost of vast suffering humanity which is barely sustaining itself,  is adding fuel to fire. This ideology has already led to lot of bloodshed in big revolutions, two world wars , public unrest , social and political upheavals. Religious preachers and leaders have failed to find the  path that will lead to welfare and peace in the world. Even world welfare bodies like United Nations have failed to the ideals for which they were formed.

Efforts of world peace have failed because they are based on hollow and directionless materialism . Today India is drawing attention from all over the world and particularly some important and powerful nations are expecting major role of India in equitable world development and in peace efforts at the global stage.

Whole world knows that India is land of Buddha, Mahavir Swami, Baba Guru Nanak Dev Ji, Swami Ramtirath,  Swami Vivekananda and Maharishi Arvind . These divine souls worked for the whole humanity. One cannot find any regionalism or sectarianism in their preachings. Their lessons inspired us to welcome all those to India who were prosecuted, abused and tortured in their lands .

Ideals of Mahavir Swami and his faith have given the world, principals of non violence , peace and no over hoarding then what is required. These ideals are meant for allivating suffering of humanity even in today’ s times. Principals of peace at individual and universal level by Gautam Budh are being explored all over the world. Preachings of Guru Nanak Dev shower soothing bliss which bring us nearer to devine presence. His saying of ‘keerat ker vand chhak’ ( praise the God and share His blessings in the form of food with others) has been inspiring his followers to work for all suffering humanity.

Even in recent times , the organisations and religious groups like Khalsa Panth, Arya Samaj, Ramakrishna Mission, Gayatri Pariwar,  Art of Living, Patanjali Yogpeeth and Divya Jyoti Jagrati Sansthan are working for the welfare of mankind all over the world. Today , world’s biggest Hindu organisation, Rashtriya Swayamsevak Sangh is marching steadily towards it’s fixed goal of  taking the undivided Nation to its Prime Glory.

In those days of struggle for independence, the undaunted Doctor Hedgewar set up an unprecedented benchmark of conditioning the Hindu Psych  by reviving the almost forgotten sense  of pride  that was somehow missing  in the contemporary political religious outfits struggling with similar objectives .

Late pracharak of RSS and great scholar of Hindutava, Pandit Dindayal Upadhyay, propounded his concept of integral Humanism( Ekatam manav vad). This concept is synonyms of RSS’s ultimate  target of making undevided nation to the status of Vishavguru. According to present day sarsanghchalak of the RSS Sriman Shriman Dr Mohan Bhagwat, ” Ways of worship may be different but we can carry on with our different ways of worships without any problem by respecting each other’s way of worship. If we sincerely believe in those things which help in creating harmony and positive interactions , only then we can think of welfare of our society, Dharama, country and world.”

Respected second Sarsanghchalak Shri Madhav Rao Sadashiv Rao Golwalkar while explaining about aims of RSS had said” our target is to take our nation to its prime glory. This only can be the basis of world welfare. India in its Prime Glory was once the Vishwa Guru and we are confident it will be again Vishavguru in the future . “

Founder of RSS , Dr. Hedgewar had an option of persuing luxurious life in medical profession but he chose tough life of an ascetic and sacrificed every bit of his body for the sole purpose of taking undivided nation to its prime glory. Several whole time Pracharks followed him and offered their whole lives for the cause. Today several thousand pracharaks and several lacs dedicated Swayam sewaks are toiling tirelessly for the same cause.

Today if you venture out early in the morning , you will find an unique process of moulding any ordinary person into a through knowledgeable , healthy individual having all those traits of intellectual and physically strength who will fulfill the aim of Dr. Hedgewar. This process developed by Dr. Hedgewar, is unique and unparalleled. No where such experiment was done to organise people to work selflessly for some cause.

An open playground. Saffron flag fluttering in the centre groups of youth and boys are are absorbed in a variety of Bhartiya games. Responding shouts of joyous enthusiasm open fill the air .The site of daring young man pressing forward with the cry kabaddi , Kabbadi on their lips fills the heart. Chief’s whistle or order has a magical effect on them. There is instant perfect order and silence. Then exercises follow: wielding the Lathis, surya namaskar and marching etc. The siprit of collective effort and spontaneous display pervades every program. Then they sit down and sing in a course the song charged with patriotism  Discussions follow. They delve deep into the problems affecting the National life. And finally They Stand In rows before the flag and recite the prayer ‘Namaste Sada vatsale matrabhoome ‘whose echos fill the ear and stire one’s soul .Bharat mata ki Jay uttered in utmost  earnest furnishes the inspiring touch to the entire program.

This is unique and a familiar scene in our country. It is a scene which fills the hearts of our country men with pride and affection.  Throughout the length and breadth of Bharat not only in towns and cities but in for off helmets Hills and Dales, these inspiring scenes and Soul steering songs gree ust regularly and punctually at the time of sunrise sunset or at night everyday.

(Writer is a senior journalist and columnist)