by Dattatreya Hosabale
in Articles 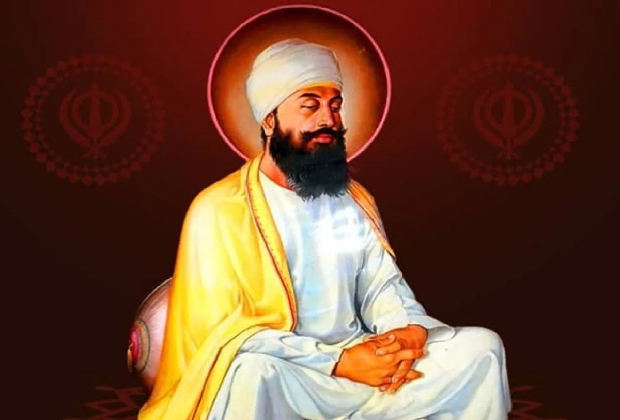 In Indian history,Guru Shri Tegh Bahadur’s personality shines resplendent like a bright constellation. He was born in Amritsar to Guru Hargobindji and Nankiji on Krishna Panchami in the Baisakhi month. As per Nanakshahi calendar, Guru Tegh Bahadur’s four hundredth birth anniversary falls on May 1 this year.

Guru Tegh Bahadurji was born into a tradition that challenged Mughals of Central Asia that had occupied vast tracts of Indian territory. He is a symbol of tenacity, sacrifice and his life is a wonderful example of physical and mental valour. In fact, Shri Tegh Bahadur’s life stands out as one of the greatest experiments in character-building. By reining in one’s negative instincts, even ordinary men can follow the path of dharma. Those who are trapped in the chakravyuha of blasphemy, avarice and pride cannot remain stable in crisis.

Whilst the behaviour of ordinary men changes in the midst of joy and sorrow, men of great attainment rise above these considerations. Guruji proclaimed that one should be beyond “praise and slander, look upon gold and iron alike” and not be “touched by pleasure or pain, greed, emotional attachment and egotistic pride” (Shlok Mahalla 9 – page 1426 onwards of the Sri Guru Granth Sahib).

In his teachings, Guruji exhorted, “One should neither frighten away anyone nor be scared of anyone”. The greatest fear is the fear of death, that goads a person renounce his values and turn a coward. Guruji said, “I cannot forget the fear of dying, and this worry has torched my body”. Through his preachings and selfless work, Guruji sought to create a society in which one could walk the path of dharma, free from worry and fear. Guruji’s life is perhaps the finest example of attaining the four purusharthas (goals of human existence) – dharma (righteousness), artha (wealth), kama (desire) and moksha (liberation).

He successfully demonstrated excellent human values in his family and the society whilst accomplishing the goals of artha and kama in his domestic life. He attained martyrdom for the cause of dharma. He envisions hope and trust even in the worst of crises. Guruji famously said, “I have regained my power, my bonds are broken and all options are open on to me.” Guru Tegh Bahadurji’s thoughts and actions had such an inspiring impact that they broke the bonds shackling the country and unlocked the path of liberation. His messages in the Braj language is a unique exposition of Bharatiya culture, philosophy and spirituality.

Guruji’s abode, Anandpur Sahib, emerged as a centre of mass struggle against the injustice and atrocities of the Mughals. Aurangzeb wanted to make Hindustan Darul-Islam. Kashmir, an intellectual and spiritual centre, was his key target. The people of Kashmir approached Guruji for guidance, following which he held a lengthy discussion. Situation everywhere was grave. How could the cruel Mughal ambitions be frustrated was the question.

There was only one route – a great man would have to martyr himself to protect his nation and the faiths of her people. Through this sacrifice, a tide of public consciousness would galvanize the nation and shake the walls of the foreign Mughal empire. Who would make this sacrifice? This quandary was resolved by Guruji’s son, Shri Govind Rai, who asked his father if there was anyone who commanded more respect and stature than him.

Aurangzeb’s army imprisoned Guruji along with his three disciples and brought them to Delhi, where they were subjected to inhuman torture and pressurised to convert to Islam. All kinds of alluring assurances were made. But, Guruji stood firm on the path of dharma. Angered by his defiance, the Mughals forced Guruji to watch as his disciples were tortured in Chandni Chowk – Bhai Mati Das was ripped with a saw, Bhai Diyala was drenched in boiling oil and Bhai Sati Das was tied and burnt in a heap of cotton. The Mughal regime probably felt that he would be frightened by the treatment meted out to his disciples. Guruji knew that the very essence of dharma was to fight injustice and tyranny. As Guruji did not waver, the qazi ordered the executioner to behead him. This act of martyrdom led to a reawakening across the nation. On the martyrdom of his father, tenth guru Shri Govind Singh said,

“He protected the tilak (mark on the forehead) and janevu (sacred thread). His martyrdom is a significant event of the Kali Yuga. For the sake of saints, he laid down his head without even a sigh.”

On a day when the whole country is celebrating Guruji’s 400th birth anniversary, let us be reminded that the best way to honour his memory was to follow his path. Today, there is a scramble for enjoying material pleasures. Guruji, however, showed the path of renunciation and restraint. Envy, malice, selfishness and discrimination are prevalent all around. But, the revered Guruji spoke about creativity, harmony and conquering disorders of the mind.

One of the lasting effects of his teachings was on the people he passed en route to Delhi, who refrain from cultivating tobacco till date. Fundamentalist forces are  rising to gain dominance. But, Guruji showed the path of valour, selflessness and sacrifice. At a time when mankind is entering a new phase of change, the sacred memory of Guruji propels us to follow his path and build a new India that is rooted in its soil.