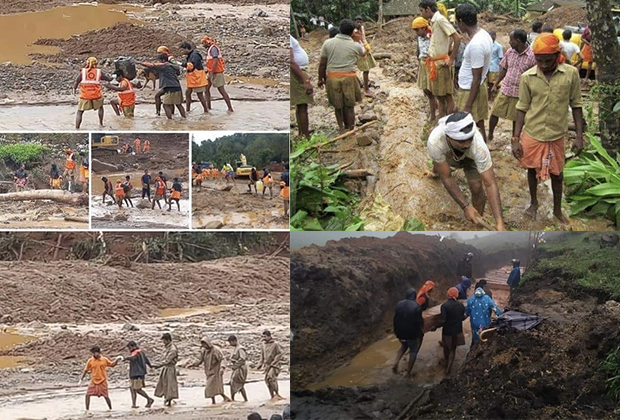 Seva Bharati, who usually does rescue work through exemplary interventions were banned to do the mission, by the Left government and ministers. On Saturday morning Seva Bharati volunteers were stopped by the authorities about twenty kilometers away from the disaster site, Rajamala Pettimudi but no one backed down. They took an alternative route through the forest path and reached Pettimudi. About a hundred volunteers were in service on Saturday.

Following the arrival of the Left ministers to witness the tragedy, the authorities have come out and blocked Seva Bharati volunteers from carrying out rescue operations and asked them to stop their service activities. Authorities opposed the protest with all available police forces, special services, and the army.

On the previous day only the Fire Brigade, Disaster Management Force, and Seva Bharati were at the helm of the rescue operation. Despite the inclement weather, Seva Bharati volunteers were working with the government to provide relief. Seva Bharati was at the forefront of assisting in locating the bodies of the dead.

By noon on the day of the tragedy, the first group of 20 people had reached Petty Mudi. The first day’s rescue operation was carried out with the help of Seva Bharati.

Sevabharathi’s rescue operation is progressing under the leadership of  TK Ramachandran and Secretary TR. Ranjith. The tragedy that befell Thursday night became known to the outside world only on Friday morning. The rescue operation was very difficult in the muddy and rocky debris. Volunteers were at the forefront of searching for the pulse of life under the mud.

Seva Bharati also assisted in burying the dead bodies, which were returned after postmortem was done at Tata Tea Hospital, 1.5 km from the site of the disaster.

The other day, a Member of Parliament said “no one is alive”, but Seva Bharati volunteers said they were trying to save someone’s life if they had any. LDF Convener A. Vijayaraghavan has come out with a statement against Seva Bharathi. Vijayaraghavan alleged that Seva Bharati activists were politically motivated. But Seva Bharati workers are working hard in the face of disaster, realizing that their duty is to save the victims.